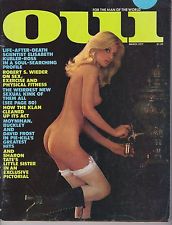 I  was a stylist for Suze Randall, the most notorious and ONLY female photographer for Playboy, Oui,  Hustler, Chic, and Penthouse Magazine during the 1970s sexual revolution and beyond.

A stylist has many job descriptions; such as Makeup Artist, Costuming, Props and the ability to handle people, both male and female models in unusual situations. For example, one shoot involved a nude couple.

Suze said, “The hair on his ass freaks me out. Fix it!”

It was my job to keep him calm while I shaved his backside with a bladed razor. It is a vivid memory.

Suze clapped, “You got it!”

A fascinating challenge was working with Debra Tate, Sharon Tate’s little sister. She was my age, pretty,  and underweight. It was my job to make sure her naked body was photogenic for the camera. Debra was nervous, but we got along fine as long as I let her take breaks when she wanted.  Body makeup smoothed out her complexion from head-to-toe. Suze introduced a feather boa to camouflage any flaws her camera might catch. The shoot, published during that time, was published in Oui Magazine, owned by Hugh Hefner.

A fringe benefit of being a stylist, some say, is enjoying many an evening with the so-called elite of the industry.  Opportunities were abundant and Suze encouraged me to attend the events with her. I also had the privilege of inviting a date.

Going out with Suze was a party! Suze was a strong sexy young woman; two years my senior, and had risen from a nursing career in London where she’d started as a nude model and picked up the camera, then  became a star herself because she’d dragged a young Norwegian girl named Inga to the United States. Suze kept her under wraps for Hugh Hefner’s Playboy issue and Playmate of the year in 1975/76. The young model was a sensation currently known as Lillian Muller.

When I met Suze in early 1977, my agent, Jessie had sent me to the high-rise in Century City where I she interviewed me. I was new to the magazine industry, having worked now and then as a model for several photographers who hired me as a makeup artist.  I’d also accepted two nude modeling offers arranged by my agent Jessie. The photographers paid me double time for applying my own makeup.

During my interview at Penthouse Suze’s eyes sparkled,  “You resemble Inga.”

I pretended to know who Inga was and got busy educating myself.  Inga was so beautiful, I figured Suze was flattering me or flirting with me.  But then, I supposed it was my Swedish heritage that made her see Inga in me.

Suze fawned over me and asked, “Please  pose for me?”

How could I say no?  I knew of her reputation and worried that she wanted to have sex with me.  I was correct in my assumption and suffered somewhat because I’d been fighting off male photographers and did not want to say no to Suze.  My professional reputation was on the line. Having kept my nude modeling a secret for some time, I realized perhaps it was time to accept that I was now working in the Sex Industry.  Who was I kidding? After everything I’d endured with my ex-husband, I believed I could handle this. I believed in a woman’s freedom of choice!

My biggest hurdle happened the day Suze dragged me down to the Beverly Hills Hotel to meet Larry Flynt for cocktails.

Please see PART II of this story: “How to Audition for Hustler, or the day I met Larry Flynt,”