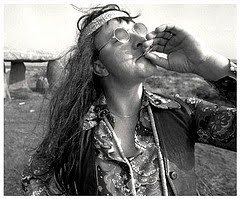 She’d found his number in the yellow pages under Modeling Agencies.

His office, off Hollywood Boulevard, was around the corner from a bar called Two Dollar Bills.

He said to turn right off the Boulevard and right again in the alley.  She was looking for a gate. He’d told her to pull the string and follow the cement path to a red door.

The door swung open. He blinked and passed his eyes over her,  then said, “Sorry, I’m on the horn–come on in.”

She caught a glimpse of his young face before he turned. He wore a thin gray T-shirt with a Led Zeppelin logo. His blonde hair trailed the length of his spine, held back in a leather thong. Skin-tight bell bottoms with no pockets, the denim, worn as thin as tissue paper stretched across his skinny ass.

She followed the squish of his leather sandals up the dark hallway,  smiling to herself because he was perfect.

Turned into a tiny room with a desk, a metal chair and a  window with the drapes pulled tight. The room was dark and musty; the carpet matted and crispy beneath her feet.

She’d perched on the metal chair in front of his desk. He hung up the phone,  lit a cigarette, then made another call holding his finger up signaling he needed another minute.

She’d chosen a mandarin collar dress that buttoned up the front with frogs and a pair of flat gold sandals. The dress was almost too short to sit in, but she thought it flattered her long legs.  But mid-summer in Hollywood is stifling, and there was no air conditioning, so she reached up to brush the fine drops of perspiration bleeding from her forehead.

He finally looked up, banged the receiver down, and leaned forward, “You must be Sarah, I’m Jessie. Talk to me”.

He had a silky blonde mustache that covered his entire upper lip.  It moved up and down when he spoke. She watched as he lit a cigarette, his lower lip pink and full, and threw his head back blowing smoke toward the ceiling.

“We spoke on the phone about modeling jobs,” she said wearily.

“Oh! Yeah, babe, gesturing his thumb toward his chest, that’s what I do, right?”

“I think I could model clothing and possibly swimsuits?”

He took a drag off his cig and relaxed back in his squeaky chair, eyeing her and nodding, “Sure, that’s cool.”

She waited while he studied her.

Finally, he signaled with his cigarette, “Stand up, over there.”

She stood, and moved next to the shabby curtain.

He looked at her appraisingly, “I might find something for you. Turn around.”

She turned, breathing in dust from the heavy drapery wondering why he didn’t open a window, then sat back down on the metal folding chair.

He crossed one leg over his knee, spun his chair, and leaned back against the dirty wall. He smashed his cig in an overflowing ashtray, raised his brows over wide blue eyes, and leaned forward again.

“Now Sarah, he gestured with his open hand, you can say no, ya know? But I need to ask a question. Have you ever considered modeling nude? I mean it’s more money and I think if your body is okay we might get you some work sooner”.

She looked into his brilliant baby blues, “I could maybe do that.”

“That’s good, that’s good.” He lit up a fat doobie, sipped at it, and offered it to her across the desk, holding his hit in, he nodded to her.

She shook her head, “No thanks.”

Sarah began unbuttoning those stupid frogs on the front of her dress and realized it was a bad choice after all. She peeled off her damp dress, stepped out of it, and laid it carefully over the metal chair.

She stood in front of Jessie in her black panties and gold sandals.

Jessie stood and picked up the Polaroid camera. He directed her, “Hold your hair up off your shoulders, raise your chin; and turn around”.

She took a deep breath.  Her large creamy breasts rose up and her tummy flattened as she intertwined her fingers under the nape of her neck, pulling her long red hair up, she settled with her elbows jutting out.

He took his time getting shots of her upper body, front, and back.

“Is it alright if you take off your panties?”

She nodded, dropped her hair, slid her panties down, and stepped out of them.

Jessie was on his knees now,  “Spread your legs slightly. Yes! Now turn around and we’ll get a frontal view.”

She smiled because he was breathing heavily, and she was impressed by his ability to tend to business while she stood there naked.

She pulled her dress back on, fumbling with the damn frogs.

After Sarah signed some waivers and approved the polaroids  Jessie assured her, “Don’t worry, you’re sure to get some work with that white skin and red hair.”

Later in the week, Jessie found a photographer who wanted to use Sarah in a layout for Harley Davidson Magazine.

Afterward, Sarah went to Jessie’s office to pick up her first check. She knocked on the red door.  He opened it instantly, “I told you I could get you work babe!”

She smiled, “Yes, you did–where’s my money?”

He held up a finger, “I have something to show you first”.

He took her by the hand and led her down the crusty carpeted hallway and into a room with a bed and bright wide open windows. A cool soft breeze billowed the white curtains. He sat on the edge of the bed grinning.

She stepped up to him.

He ran his hands up her thighs and lifted her skirt showing him her naked body. He gasped when she pulled his head forward between her hot thighs.